In 2012, the Obama administration forged an agreement with the auto industry and California to improve transportation sustainability in the United States. The regulatory program would gradually tighten standards set through the national Corporate Average Fuel Economy (CAFE) program, nearly doubling the average fuel economy of new cars and light trucks by the year 2025.

Ramping up CAFE was a win-win-win. It provided regulatory certainty for automakers, reduced gas costs for consumers, and helped shrink the carbon footprint of the transportation sector. The plan was both ambitious and broadly accepted.

On August 2, the Trump administration released a proposal to stop the plan in its tracks by freezing CAFE standards (and the corresponding greenhouse gas standards) at 2020 levels. This move is being justified on economic grounds. The administration claims that freezing CAFE would reduce societal costs by over $500 billion, including savings of $253 billion in increased vehicle prices and $198 billion from reduced fatalities and crashes. These numbers are graphically represented below. 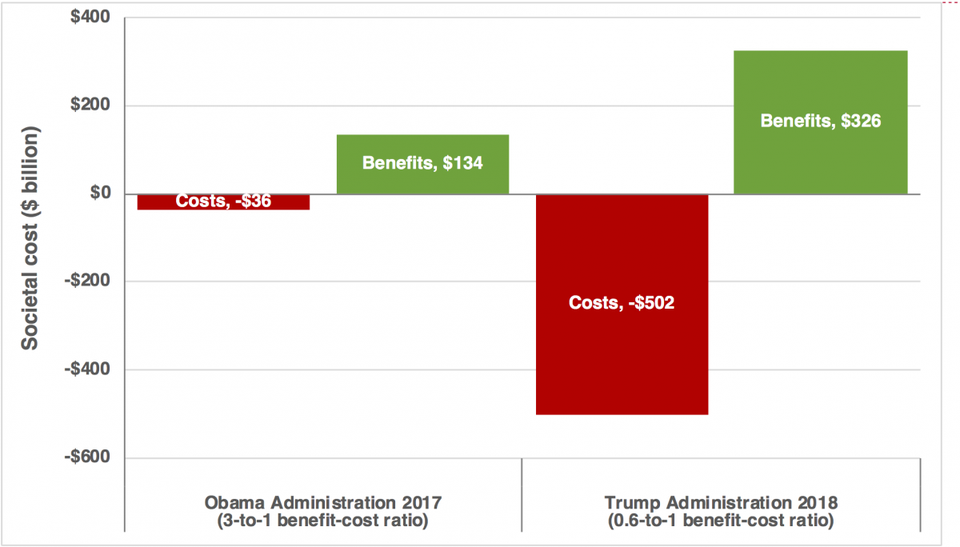 Closer inspection reveals that these new Trump administration numbers are based on some, shall we say, creative math.

Let’s start with increased vehicle prices. The original 2012 CAFE plan was a rare case in which a regulation was expected to save consumers money—a lot of money. Experts working with the federal government estimated that new cars produced in model year 2025 would cost an extra $1,200 on average to meet the stricter CAFE standards that were being proposed. But that extra up-front expense was expected to be more than offset by about $6,000 worth of gasoline (discounted appropriately) that would be saved over the fuel-efficient car’s lifetime.

The Trump administration rejects those numbers, asserting that the manufacturing cost to meet the 2025 CAFE standard would increase by $1,850-$2,260 per vehicle (relative to 2020). This assertion does not match with any other major studies. It is more than double the last official estimateissued by the Environmental Protection Agency in January 2017. And it is three to four times higher than a recent finding from the International Council on Clean Transportation (ICCT), which observed that automakers are employing innovative technologies such as turbocharging, cylinder deactivation, and lightweighting faster, more effectively and more cheaply than previously anticipated. Based on this ICCT analysis, vehicles produced to meet the 2025 CAFE standard would cost only $550 more than vehicles produced to meet the 2020 standard.

The administration doubles down on their flawed cost assessment by contending that vehicle price increases associated with stricter CAFE standards will induce people to hold onto vehicles longer. Since older vehicles are less safe, the argument goes, there would be more crashes. The administration concludes that freezing the standards would save nearly $198 billion in avoided fatalities, injuries, and damage. The thing is, even though efficiency standards are being implemented all over the globe and have been for years, there is no evidence of any such an effect. It is an unresolved question whether consumers respond more to the somewhat higher vehicle price or the improved fuel efficiency and safety technology.

Freezing CAFE standards is highly problematic for reasons beyond the fact that consumers would be losing over $130 billion on fuel savings. First, a substantial portion of these foregone savings would revert to foreign oil companies and governments, a national security and macroeconomic concern. Note that this increased energy consumption of a half million barrels of oil per day is equivalent to burning up the entire U.S. Strategic Oil Reserve a couple times over. Second, from an environmental perspective, this rollback increases climate-causing emissions by over 870 million tons of carbon dioxide. To our knowledge, there’s no single policy on the planet with this much climate impact.

The administration’s proposal is also legally tenuous. The proposal seeks to revoke the rights—granted by Congress in the 1960s and ‘70s via the Clean Air Act—of individual states to adopt emissions standards higher than the national minimum. This unprecedented move all but guarantees extended litigation. Extended litigation translates into extended uncertainty for automakers and their suppliers, who face the risk of California and the other states prevailing in court.

Finally, freezing CAFE standards risks U.S. automakers losing a competitive edge internationally. Fuel-efficiency standards in many major auto markets outside U.S. borders are even more aggressive than the 2025 CAFE targets set under the Obama administration, and substantially stricter than the 2020 targets that would persist indefinitely under a CAFE freeze.

We ask, perhaps naively, what is the Trump administration thinking? We are researchers, not pundits, and so we hesitate to speculate. But the evidence shows that freezing CAFE standards is hard to justify on economic, social, environmental, or legal grounds.

This blog post was originally published online at Forbes.