Sometimes the best policies must overcome early struggles. A great example is the Low Carbon Fuel Standard (LCFS), ordered by Governor Arnold Schwarzenegger in 2007 in support of California’s Global Warming Solutions Act of 2006. The LCFS is a statewide policy designed to reduce the lifecycle carbon intensity (CI) of transportation fuels—that is, the total greenhouse gas emissions from production to consumption, including raw materials, transportation, and processing. It achieves this goal by setting a regulatory target for fuel CI. Market forces then determine the most efficient way to stay below the target, even as it strengthens over time. 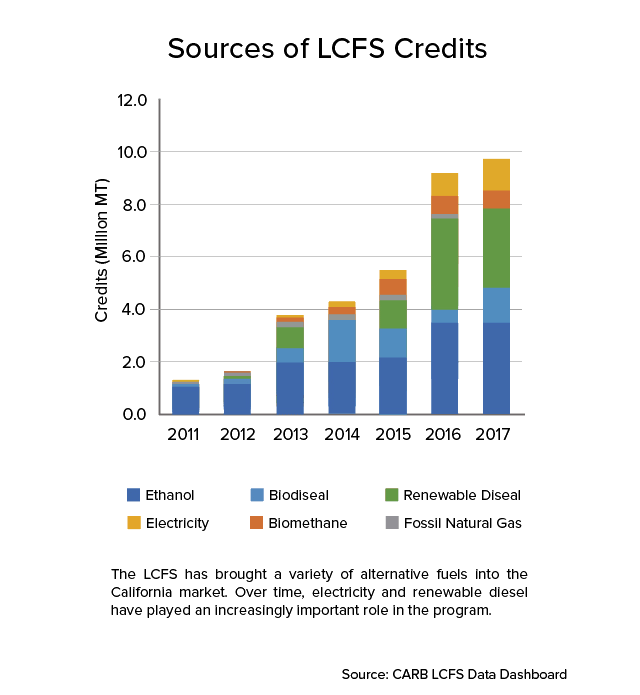 The LCFS was quickly embraced by the California Air Resources Board (CARB), but suffered a torturous first decade. It survived a barrage of lawsuits, resisted the oil industry’s lobbying for its elimination, and won over many politicians who may have been willing to trade it away in favor of other, more popular policies such as carbon cap and trade. The LCFS did not seem destined for greatness, never mind survival.

But despite these obstacles, the LCFS endured. A decade later, it has emerged as an inspiring, if little-known, success story. The average carbon intensity of fuels sold in California has declined almost 5% since 2010, resulting in a reduction of over 38 million tons of carbon. And far from getting rid of the LFCS, CARB is ratcheting up its ambition, with relatively minor opposition. While the original LCFS called for reducing fuel CI 10% below the 2010 baseline year by 2020, an update to the standard extends the target to 20% by 2030.

What is the secret? A big reason is that several key groups that often disagree with each other on policy issues, have become beneficiaries—and, thus, enthusiasts.

For electric utilities, the sale of electricity to electric vehicles (EV) generates LCFS credits for the utilities. Utilities sell the credits, mostly to oil companies, who need the credits to meet the LCFS target. The revenue from selling credits is used for a variety of activities, including providing point-of-sale rebates to EV buyers and supporting community-based EV programs. A separate provision uses LCFS credits to help fund the construction of public high-speed charging stations. Electric utilities value this funding because it encourages the sale of EVs, which provides a new electricity market, as well as the potential to use EV charging to balance uneven demand and variable wind and solar power supply.

For natural gas utilities, the LCFS provides high-value credits for methane (natural gas) from landfills, animal waste, and other agricultural activities. This biomethane is rated as a very low carbon intensity fuel under the LCFS because it is treated as a byproduct of existing activities, meaning that little additional energy or resources are typically used for its production. The value of LCFS credits for byproduct methane is huge–as much as $10 per million BTU, compared to retail prices of roughly $3 per million BTU for fossil-based natural gas. Often referred to as renewable natural gas, it is viewed  as a bridge to a low-carbon future.

For automakers, the point-of-sale rebates, referred to above, are an important incentive to prospective EV owners. These rebates, which are expected to be initiated in 2019, will amount to about $2,000 per vehicle. The rebate will stack on top of other rebates and credits, will not come from taxes, and can help automakers boost EV sales.

The LCFS even provides benefits to the many oil companies that initially opposed it. It provides credits to refiners who invest in more efficient, lower-emission equipment, oil companies that invest in carbon capture and sequestration, and companies that build hydrogen fueling stations (even if they are unable to sell much hydrogen initially). Shell has indicated it plans to build a network of new hydrogen stations in California because of the financial benefits of these “capacity credits.”

And for policy wonks like me, the LCFS demonstrates the importance of making smart policy choices. The LCFS did this in two ways. First, the LCFS used a performance-based standard that does not pick winners, but instead lets the best solutions rise to the top. Compare this to the national Renewable Fuel Standard (RFS), which mandated the blending of biofuels into gasoline. The RFS was developed at a time when cheap, sustainable cellulosic biofuels seemed to be just around the corner. As this expectation has failed to materialize, the rigid requirements of the RFS have become a political and regulatory quagmire.

Second, the LCFS harnesses market forces by providing a credit trading mechanism. Companies that go above and beyond the call of duty are rewarded, while those that find it expensive or difficult to meet the standards can buy credits from others. The result is a more economically efficient path to CI reductions.

These characteristics of the LCFS, combined with its appeal to an expanding array of beneficiaries, have enabled the LCFS to become a cornerstone of California’s push towards climate neutrality. Indeed, the LCFS is now starting to gain traction even outside of the state. Oregon and British Columbia adopted a version of California’s LCFS a few years ago, and Canada and Brazil are both close to adopting LCFS-like policies of their own.

The lesson is clear: good policy sometimes needs to survive a difficult childhood.